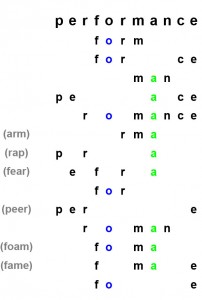 Performance as “art” and “art” as performance? The dawning of the new millennium and the 21st century brought with them assessments and expectations – promises. The performances were tried in the previous century in all the continents, in numerous countries and, sometimes, under difficult conditions and in very different political and social situations (wars, cultural charges, political agitations, social conquests or regressions).

However, in the western societies, Performance did not need to have a heroic and risky course.  Although its origins are conventionally connected with the futurists – another approach claims that Empedoklis was the first performer – performance interacts and is connected with all the radical artistic currents (dada, surrealism, conceptual Art, neo-dada, fluxus e.t.c.) and thus asserts a singular presence in the artistic events, mainly for the ability of renewal and eternal creativity that characterizes it.

Performance, beyond its political scope, tries and is tried on the border of artistic expressions.  Whether it takes place in the open or in a closed space, whether it is individual or interactive, with archaic or with modern technical support, in institutions or outside of institutions, with small or large audience it constitutes a privileged moment. And that is because it functions as an occasion of profound energy exchange between the artist or the artists and the public, in particular time and space conditions, yet always with the presence and the initiative of the performer.  In this spirit, performance is elevated as a field of examination of communication, of interaction and, finally, of “art” itself. Being on the border of artistic establishments, without ignoring the (pre)history of artistic currents, it (re)composes them without the need to resort to orthodoxy or to doctrines about the “Art”.  The strategies of the performers are ductile and in permanent review, giving in the performances the privilege of an initiatory process (for the participants) regarding the substance of things and the essential uncertainty of their ways of approach.

An international meeting on performance in the frame of the Biennale constitutes by definition a paradox, as Performance is the <>, that is to say the most ‘untamed’ artistic practice. In this spirit the initiative of the State Museum of Contemporary Art to include performance as a field of innovating action is charged with multiple demands and expectations. On the one part, artists from Europe, Asia, America, Africa participate. At the same time, laboratories, meetings, discussions, special educational action, master’s classes are organized.