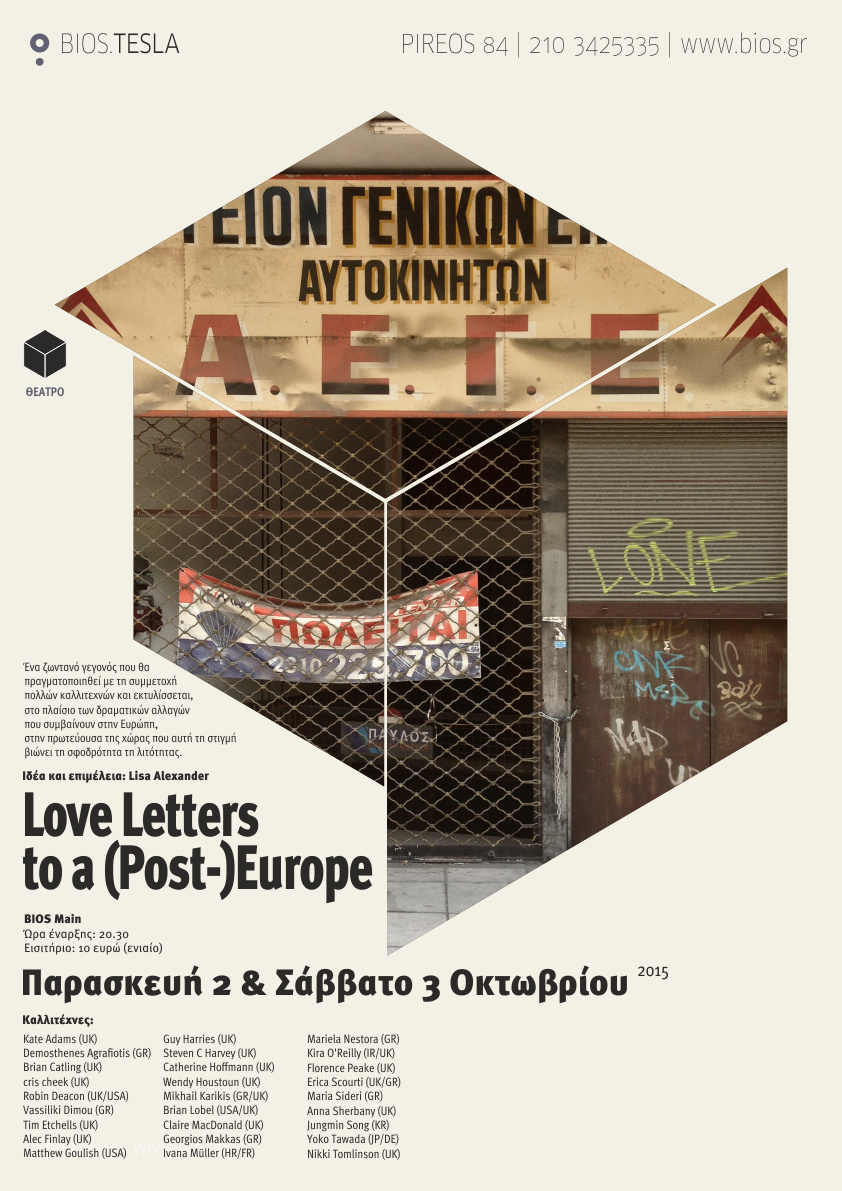 Love Letters to a (Post-)Europe was a curated event of short works performed in the context of a rapidly changing Europe and in a city whose country is currently bearing the brunt of austerity.
A process that has clearly been seen to fail.

Artists were invited to respond to the provocation below with a work no longer than 15 minutes in length – in any format – to be presented live. Artists’ participation is an expression of solidarity with Greece.

In the Greek language there are more than four words for Love. Five years ago Europe entered a deep crisis indicating something that ran a lot deeper still, ‘a crisis of social imagination’ in
which economic dogma had ‘taken hold of public discourse’ according to Berardi. This also marked the start of ‘Europe’s uprising’ by its people: the encampments in Madrid, Athens, Rome,
London and beyond. The body’s presence in public squares confirmed something infinite and unquantifiable to a global system.

Now we seem to have come full circle and economic dogma is being used to inflict regime change. There has been a lot of debate on what has been enacted in the name of Europe over
the last few months.

This event asks artists to respond with the action, idea or form of a love letter. Of now. It may also be ending it. An action approaching another, a double listening.

Levelled at this crisis of social imagination, economic dogmatism and neoliberal tyranny is imagination, empathy, sensuality, presence, being together, singular witnessing, living manifestos,
stories, acts of friendship, fellowship, solidarity, refusals of order, nonsense, gifting, calls from and to the wilderness, rants, tough love, seductions, messages in brokenness, adoration, utopias
and post-utopias, songs from the margins, addressing the now.

Demosthenes Agrafiotis was among the 27 european artists participating at the event.

His performance/lecture was titled:

Many efforts have been attempted to define the cultural “essence” of Europe.One of them assumes that Europe is the territory in which the cultural difference is respected. I could use the term “meta-Europe” in order to name the end of the above respect.

“Krisis” has two meanings in Greek. The first, the disruption of the normality or regular functioning of a system_ biological or social. The second, the crucial moment in any process of decision making, when a judgment is needed in order to assess the objectives and methods.

What could be a performative lecture of the binome [Europe/crisis] ?