Demosthenes Agrafiotis will participate in the all-day conference named “Ekistics. The heritage of Ekistics. Printings and perpectives“,
dedicated to the legacy of Constantine A. Doxiades, the unforgettable friend Panayis Psomopoulos, Giannis Papaioannou
and those who sealed the international dialogue on the education and the science of human settlements,
with his submission “Avant – Garde, mis-recognition. Landmarks from the adventure of Ekistics”
as well as with a performance / demonstr@ction 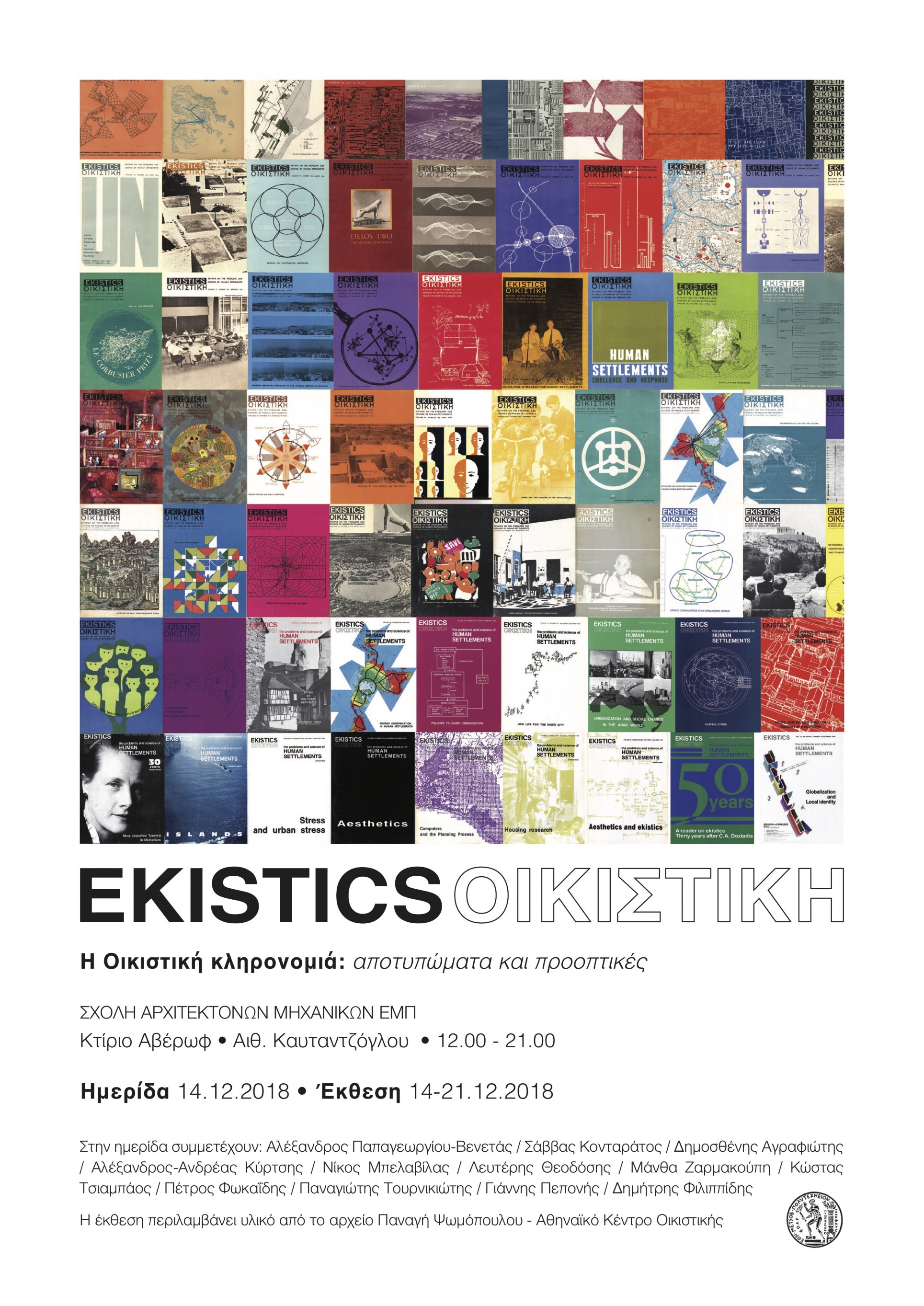 “Avant- Garde, mis-recognition. Landmarks from the adventure of Ekistics”

The emersion of Ekistics as a science of human settlements and “Ekistics” as a magazine in the service of the former has been the subject of many research approaches. From Urban Planning to Cultural History of Cities, from Sociology or Urban Geography to Social Psychology of the Structured Space [1]. From the previous range of scientific considerations, the analysis focuses on the Avant – Garde ‘s phenomenon, where and when this manifests in clarity, namely in the territory of scientific knowledge, technological innovation, artistic act, literature, etc.

The term “Avant- Garde” describes a state of radical change and discontinuity in a field of collective acts, where conflicts emerge  in order to dominate over a certain period of time. Assuming that after World War II the field of Human Settlement Planning has been under formation  in a national and international level, then Ekistics appears as a powerful protagonist in a grid of partnerships and rivalries. In this spirit, following questions come up at least as valid, if not reasonable: Which were the main characteristics that defined Ekistics’ avant-guard nature? Were Ekistics’ avant- guarde nature different in its national version, compared to its international version? Consequently, how did mis-recognition work [1], the difficulty of absorbing and accepting of the Ekistics? How was ultimately affected its occupation of the dominant position? What was the role of “Ekistics” magazine among the multiple competition? How did the strategy of its founder, Constantine Doxiades, affected its vanguard nature? How did Panayis Psomopoulos contributed with multiple acts into realising Ekistics’ rich Avant-Garde history?

The aforementioned questions, which obviously can not be answered in an acceptably complete manner, presuppose and rely on an epistemological canvas composed of the Sociology of Avant- Garde and the Cultural Sociology of the Avant-Garde [2].

In this spirit, we will focus on illustrating the landmarks associated not with the emersion of Ekistics, but with its scope as an approach and as a tool of analysis and act after the death of its founder. In particular, two situations will be used: The opportunity Panagis Psomopoulos had to show that Ekistcs can contribute to modern urban planning projects – keeping its innovative potential. As well as how the Ekistics managed to create a tradition or ensure the continuity of a school of thought and scientific vision – overcoming the question of miss-recognition within the Greek social horizon.

The first situation is related to the project “Sustainable Urban Living in the Coming Decades” of the VALUE-II program, XIII Directorate of the European Commission (1994) [3]. The second situation relates to the meeting of the World Society for Ekistics(WSE) in Pune, India (11/2010). Those collective actions indicate the regenerative power and innovative adaptation of Ekistics and, at the same time, its differential reception on a planetary level. In parallel, Panagi’s Psomopoulos multidimensional involvement is outlined both in the formulation as well as in the long-term realisation, of the Ekistics as a Science of Human Settlements and as regular periodic publication.